The face mask is a symbol of enslavement. The global elites are laughing.
https://www.proaudiodesignforum.com/forum/php/

by mediatechnology
Here's one from a well known author and publication: Let's see how long it takes for JR to find this one and set our minds right.

(I'm scanning and posting this stuff in an effort to clear off the scanning table.)

by mediatechnology
Here's on from our own John R, the P-10. Check out the op amp 'round the FETs.

by JR.
I'm not sure what the question is, but yes I have opinions about phono preamps.

The Jung/White pre looks decent, and is better than one I published that same year in Popular Electronics. My circa 1978 preamp was actually two pre's inside a Disco Mixer. That first one from me, was based on the LM387 national chip. In hindsight one thing I don't like about the National approach is the interaction of the non-inverting topology's minimum gain asymptote with the 75 uSec pole in the RIAA playback EQ. This was potentially even worse in the LM387 since it was de-compensated for a minimum gain higher than unity. I came up with a work around for that. By adding a resistor between the opamp output and RIAA EQ network, I fool the opamp into thinking it is running at a higher noise gain than my signal feed is getting. So in my implementation the 75 uSec pole doesn't go away until 200 kHz or so. The Jung/White preamp executed the 75 uSerc pole across an integrator so the top pole never diverged from theoretival. My suspicion is the benefit of this is not some fraction of a dB response accuracy improvement in the top octave, but from better handling of HF out of band noise. It is unlikely that a recording lathe would maintain the rising characteristic much beyond 20 kHz.
------
My P10 (schematic in Wayne's post) in 1980 IIRC used a higher performance front end gain stage. Discrete JFETs so similar noise to 5534 but better input characteristic. I used a different EQ topology, but it also delivered the true 75 usec pole.

My later P100 ('85?), schematic above, not only performed the 75 uSec EQ as a passive real pole (C2), but ran the front end open loop so it was literally impossible to slew limit my design. I think I could handle something like a 2V square wave at the input cleanly as long as it was high enough frequency to not saturate the output when RIAA EQ/gain is applied.

by mediatechnology
Here's an interesting preamp from Dimitri:

While I implemented the real pole for 75usec RIAA time constant in both of my later published preamps (P10 and P100) I suspect the benefit of this is somewhat overstated. Obviously the RIAA record equalization does not rise all the way up to light, so this true rolloff is not really a matter of accuracy (RIAA is only specified up to 20kHz). That said, In practice popular implementations using decompensated non-inverting topologies could not easily tolerate unity gain, which extrapolating out from RIAA curves would occur as low as 200 kHz. I did an even earlier pramp design using the decompensated LM387 in '78, and used a different work around to get it down to at least unity gain. I allowed the opamp to act like it was running at the higher gain required for stability while pulling the signal feed from the EQ point that fell to unity gain at HF. Clever, but not as good as my later approaches.

While I didn't read the link closely, from the schematic the use of a LM301 opamp with the feedforward cap from minus input to compensation point was a good way to improve the performance of that old workhorse, but surely by then better opamps were available, as evidenced by use of TL0xx elsewhere in the design.

Despite the numerous cites at the end of the article I didn't see an credit to Deane Jensen for the inductor in the input LTP.

Probably an OK preamp but it looks overly complex for what it does., but I shouldn't be critical, my last effort was overkill by half.

by mediatechnology
Thanks John for the comments. I saw that inductor too and immediately thought of the JE-990.

by mediatechnology
Check out the Archiver USB preamp. This thing is full of 2SK389s.

The schematics are on page 7.

Cute the way the FETS are drawn as triodes.

by JR.
In response to a telephone request from an interested DIY'er I scanned in the scheamtic for the power supply I designed for my old P100.

I doesn't have resistor values but it's pretty straightforward, Heravily filtered Zener reference times a gain of 15/zener V. The opoosite rail is unity gain inverted, The values around the transistors are dialed in for typical lump transformer unreg (20-25V).

No current limit and no thermal shutdown so not for GP external PS use. But very low noise and low output impedance. Good for audio applications. (Probably better than needed.) 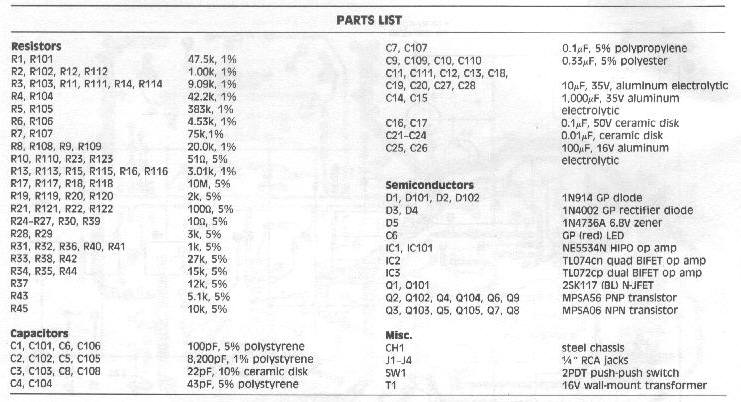 by mediatechnology
Thanks John! Was that a Popular Electronics or TAA schematic?

by JR.
That was published in TAA.. I had already published two different phono preamps in Popular Electronics...

I added a parts list above for the p-100 PS and p100- preamp too since I notice the schematic may challenge some DIY.