"The new normal" is bullshit.

Relax in southern comfort on the east bank of the Mississippi. You're just around the corner from Beale Street and Sun Records. Watch the ducks, throw back a few and tell us what's on your mind.
Post Reply
180 posts

I don't use Google Drive but I'm posting a copy of it there to annoy the "Karens" at the Washington Post.

Let's see how long it takes for these racketeering thugs to contact Google and take it down...

As of approximately 07:30 CDST the local and downloaded Google Drive copy were identical. 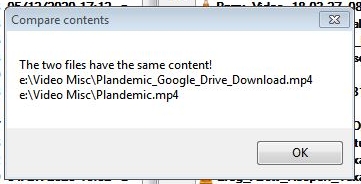 I think what scares Big Pharma and Big Media the most about Plandemic is the claim by Dr. Mikovitz is that there is retrovirus contamination in vaccines grown on animal tissue.

We should determine what is fact or fiction not the evil "Karens" at the Washington Post and their ilk.

Also note that the Plandemic Movie link in the signature line had its' site defaced with WHO messaging and now no longer loads.

This film scares them. Let's see what they do next.
https://ka-electronics.com

Re: Pirbright Institute, Bill and Melinda Gates Foundation, Coronavirus Patent and You

Well the download link for Plandemic still works, the embedded YouTube player will thumbnail the first frame and it may or may not play.


The dangerousness of Covid-19 was overestimated: probably at no point did the danger posed by the new virus go beyond the normal level.

The people who die from Corona are essentially those who would statistically die this year, because they have reached the end of their lives and their weakened bodies can no longer cope with any random everyday stress (including the approximately 150 viruses currently in circulation).

The danger is obviously no greater than that of many other viruses. There is no evidence that this was more than a false alarm.

Initially, the government tried to dismiss the report as “the work of one employee”, and its contents as “his own opinion” – while the journalists closed ranks, no questions asked, with the politicians.

But the 93-pages report titled “Analysis of the Crisis Management” has been drafted by a scientific panel appointed by the interior ministry and composed by external medical experts from several German universities.

The report was the initiative of a department of the interior ministry called Unit KM4 and in charge with the “Protection of critical infrastructures”.

This is also where the German official turned whistleblower, Stephen Kohn, work(ed), and from where he leaked it to the media.

The authors of the report issued a joint press release already on Mai 11th, berating the government for ignoring expert advise, and asking for the interior minister to officially comment upon the experts joint statement.

It is a bit early to get good data on the excess death rate (deaths beyond what was expected).

For any who wanted to weaken our (and the west's) economy, they couldn't have done a much better job.

I will be looking for good data analysis. Some deaths may have been avoided by delayed non-essential surgeries, and social distancing may have prevented some deadly infections.

Anecdotally I've hears claims of under reported, and misreported deaths.

On January 24th I wrote:

This may be a beta test.
The US Ebola scare was timed for Halloween for maximum psychological effect.

You know Ian Haydon from many appearances on CNN and other networks celebrating his heroic act of volunteering to test Moderna’s experimental COVID vaccine. The sun has now set on Haydon’s television career. He is no longer useful to the Pharmedia narratives that all vaccines are always safe for all people, that Moderna’s business partners, Tony Fauci and Bill Gates, were justified in skipping animal studies and that Moderna’s vaccine will soon rescue us from the Pandemic. Ian Haydon is now an embarrassment to Fauci, Gates, and their CNN cheerleaders. He will therefore vanish into the censorship twilight.

Moderna chose Haydon for the study because of his robust good health. He was among the 15 volunteers in the high dose group. Within 45 days, three of these—a shocking 20%—experienced “serious” adverse events according to Moderna’s press release meaning they required hospitalization or medical intervention. Less than 12 hours after vaccination, Hayden suffered muscle aches, vomiting, spiked a 103.2 degree fever and lost consciousness. His girlfriend caught him as he fell. His Moderna trial supervisor instructed Haydon to call 911 and described him as being the “sickest in his life”. Moderna let Haydon believe the illness was just a sad coincidence unrelated to the jab. Moderna never told Haydon he was suffering an Adverse Event.

“Moderna’s press release was the first I learned of the 3 AEs in the high dose group.” Haydon confessed last week on Twitter. “Later a study doc confirmed that what happened to me was an AE.” While hiding this truth, Moderna encouraged Haydon to appear on TV to deceive the public and its shareholders by declaring Moderna’s COVID vaccine trials a smashing success. On May 7, Haydon told Sanjay Gupta about his reactions in a pre-interview. The two men agreed to keep this bad news secret when he went on air. This corrupt deal bespeaks the pathetic state of journalism at CNN.

Fauci and Gates are proceeding with their plan to funnel half a billion taxpayer dollars into their reckless vanity project to create 30 million doses by November and two billion within a year (personal interview, Moderna insider) manufactured in the US and Switzerland.

The high dosage trials have been abandoned for future testing because of 3 AEs.

looks like science... This is apparently a new kind of vaccine, not the attenuated live virus.... I wonder if they still put mercury in it?

looks like science... This is apparently a new kind of vaccine, not the attenuated live virus.... I wonder if they still put mercury in it?

Well that vax is an mRNA which isn't Mercury-RNA.

It modifies your RNA (messenger-RNA) which is spooky.
Mad science.
Pretty sure it will work well for Gates' depopulation agenda.
Don't know whether or not it had an adjuvant...
https://ka-electronics.com


Over the past several decades Americans have viewed regularly televised dramatic episodes of political theater. The use of the word “episode” is especially appropriate because the dramatic scenes are sequential and continuously broadcasted onto electronic screens. The drama is designed to elicit emotion, foment anger, and unite or divide the nation in order to, ultimately, affect change.

The societal cataclysms we’re experiencing now could be naturally occurring – as the result of certain trends like demographics, technology, modernization, education, centralization, economic inequality, political platforms, or even systemic corruption and civilizational decay. On the other hand, it could be the upheavals are directed in consonance with scripts written by an inner circle of powerful people; and in accordance to the Hegelian Dialectic. How citizens view the changes realized by the United States over the last few decades, in particular, will depend upon their interpretations of probabilities and outcomes; or, rather, to the extent they believe in coincidence or conspiracy.

Many believe grand conspiracies are implausible because ambitious schemes so often fail and it’s inconceivable that scrupulous whistleblowers would refuse to expose the plans of powerful conspirators. And these objections have a ring of truth… unless, of course, the powerful few have only advanced those who’ve demonstrated allegiance while shunning, banishing, imprisoning, or “expiring” those who won’t fall in line. Perhaps this would explain why the likes of Brennen, Clapper, Comey, and McCabe continue about their book tours as Assange, Manafort, and Stone remain under lock and key.

In intelligence circles, we know control is administered via “need to know” compartmentalization and secured by constant surveillance. So perhaps blackmail and threats to individuals and loved ones are secret tactics used to compel loyalty. Even so, there have been U.S. presidents who have acted as whistleblowers at one time or another, including Lincoln, Wilson, Eisenhower, and Kennedy; each drawing attention to a nebulous Cult of Power acting as political puppet masters and pullers of purse strings. Or, as automotive magnate Henry Ford (1863-1947) once stated:

It is well enough that people of the nation do not understand our banking and monetary system, for if they did, I believe there would be a revolution before tomorrow morning.

It’s also a fact that modern mass media today is owned by a handful of corporations and, thus, under the control of a few billionaires. Could it be possible The Cult would collude to advance media narratives that further their interests while promoting agendas for their sole benefit? Of course it’s possible. Why wouldn’t they?

Over the last year I read a few books about persuasion and cognition... It was generally beneficial to our evolutionary survival to be scared and easily spooked. Because of that simple coincidences were often taken more seriously than they were. Even if a tiny fraction of coincidences revealed a real threat this could be significant in evolutionary success terms.

Return to “The Peabody Lounge”